Exploding air rifle targets are amazing fun for your home or club rifle range. They offer a very unique experience and some of them are rather spectacular. There are three main types of exploding airgun targets and the best options for you will depend on where you intend to use them.

Before using these targets it’s best to think about where you intend to shoot them. Shooting bullet planks or explosives in your back garden may not be the smartest thing to do every weekend, but I’m sure most people will get away with it occasionally.

Explosive targets use a small amount of tannerite to cause a loud bang and a ball of fire and smoke when they are hit by an air rifle pellet. The most popular brand of explosive targets are Firebird who produce a wide range of these targets from air rifle shooters right up to shotgun shooters.

It’s probably best you just watch a video on these before saying anything else, they kind of sell themselves…

As you can see this is not something you should be shooting indoors, the explosion can be loud and large. I should also say do not place these near anything flammable, particularly in summer. During a plinking session in Summer me and my friend placed one of these on a hay bale and shot it. We were quickly sprinting to the hay bale and stamping it as it managed to catch fire. 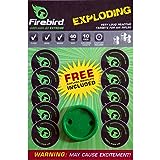 Keep in mind the explosion with this target is big, it’s not suitable for indoors and keep it well away from dry grass land or woodland during summer. These targets are great fun though. 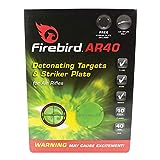 Firebird AR40 Exploding Targets
This is another target from the Firebird range for airguns. This target isn’t as flashy as the Airflash Extremes above but they still have their place. They come with a holder which must be used and they are sold in a pack of 10.

These are suitable for back yards if you have forgiving neighbours, they work well with air pistols too but be careful and stand at least 15 yards back or you may get a bit of explosive come back at you.

Explosive targets are not cheap, it’s best to store them in an air tight container or zip lock bag if you don’t intend to use them all in one go. As they age the performance can dwindle as they absorb moisture from air.

Chalk targets like the name suggests are targets made from chalk or plaster. These are silent when shot but give a big explosion of white dust when shot as they shatter into many pieces. These targets are suitable for back yards and even indoors. I like to shoot them in my garage when family visit with an air pistol.

I place these on a board with nails to rest them on. It works very well!

If you enjoy these targets long term you can also make them yourself. Get some silicone moulds and use plaster of paris as the material. Don’t make them too thick and dry them for an hour in the oven to make them very explosive.

Ice cubes and polo mints also have a very similar effect and are suitable for shooting in the same settings as chalk targets. You can also just buy cheap chalk sticks from the pound shop.

Cap and blank targets use commonly available exploding caps (from cap guns) and bullet blanks in specialised holders that go bang when shot. These come in a variety of forms but not all of them work great I’m afraid.

The ones listed below are what I have tried and tested. They all give good results but work in a bunch of different ways. 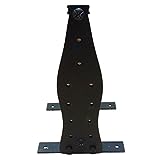 .22 Blank Bottle Holder
This bottle shaped target holds .22 rimfire bullet blanks commonly used for starter pistols. It can hold 10 blanks at a time and if any part of a pellet manages to make it’s way through the 5.5mm holes you’re rewarded with a loud bang and puff of smoke.

This is a great idea. .22 blanks are easily found at your local gun store and available without a license. They are affordable and the 5.5mm holes make them a very hard target to shoot. This target is quite loud though, it’s probably best not to use this in your garden but it’s great for taking to the club and having a little informal competition over with your friends.

A pack of 100 blanks will cost you about £13, compared to other targets listed above this target holder offers great long term value. 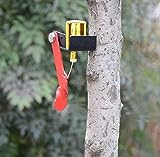 Party Popper Target Holder
This is something that is suitable for the garden, if you don’t mind the clean up… This targets holds a standard party popper that you can get anywhere.

As the disk is shot the string is pulled and the popper will go bang. This target is suitable for indoors, outdoors, back gardens or on your shooting permission. It’s not great for a club environment as you will need to keep changing the popper but if you put them out at long range (70+ yards) it can be great to watch people try and hit them.

You would be surprised what an air rifle can do at that range on a calm day. 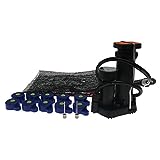 High Pressure Pop Bottle Caps
This is something you may not have seen before and is fantastic to watch. These bottle caps attach to a normal coke (or other) plastic bottle and allow you to pump them up to high pressure.

If you fill the bottle with a bit of water or chalk dust they make a brilliant bang when shot. They explode in a wide radius (up to 50 foot) if you get the mixture and pressure correct. These bottle caps are also completely reusable.

The downside is of course a pop bottle isn’t much of a challenge to shoot and the manual work that goes into pumping these up and cleaning them up at the end. Remember to recycle.

If you’re going to try your hand at some exploding targets it’s important that you think about what scenario you’re going to be using them in. You’re literally playing with explosives, it’s not wise to use these wildly with little thought to safety.

Explosive targets go bang, there is fire and hot explosive (aluminium powder) going everywhere. Using these indoors or in a dry grass field will end up in a disaster. The last thing we need as air gunners is one of us on the news for starting a bushfire.

If you’re shooting indoors look at the chalk targets or even the .22 bottle cap target. These are very suitable for these sort of gun ranges and offer a superb alternative to regular air rifle targets which can get stale.

Whatever you do stay safe and have fun.